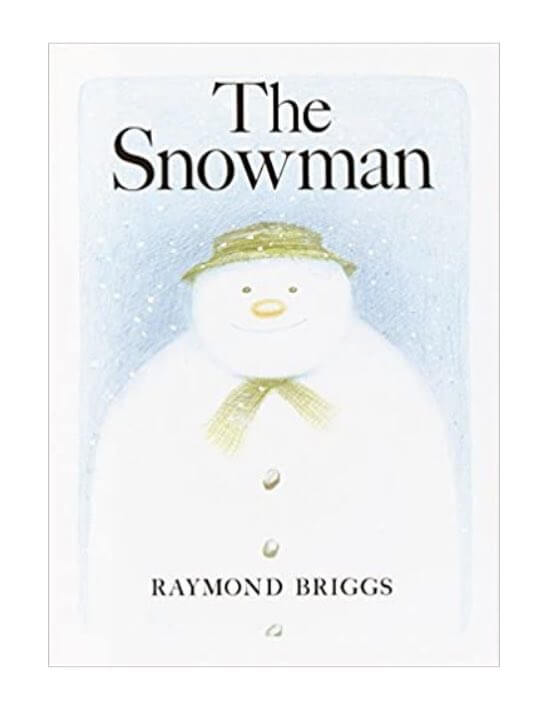 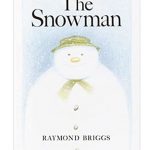 Illustrated picture book in full color. A wordless story. This is a wonderful, classic winter storybook for children. This story was later made into an animated film called The Snowman”, with beautiful original music scored by Howard Blake. (see The Snowman sheet music)

The pictures have “the hazy softness of air in snow. A little boy rushes out into the wintry day to build a snowman, which comes alive in his dreams that night. The experience is one that neither he nor young ‘readers’ will ever regret or forget.”–(starred) Booklist.

Who needs words to tell a story? In Raymond Briggs’s charming tale, told with 175 softly hued, artfully composed frames, a little boy makes friends with a snowman. He wakes up on a snowy day, tells his mother he’s going outside, then begins a flurry of snowman-building. That night, he can’t sleep, so he opens the front door and lo! the snowman has come to life. The amiable yet frosty fellow enjoys his tour of the boy’s cozy home; he admires the cat, but is disturbed by the fire. The boy shows him other wonders–the TV and a lamp and running water. Predictably perhaps, he is disturbed by the stove, but likes ice cubes quite a bit. Soon it is the snowman’s turn to introduce the boy to his wintry world. They join hands, rise up into the blizzardy air–presumably over Russia and into the Middle East–and then safely back to home sweet home. The boy pops into bed before his parents get up… but when he wakes up the next morning he races outside only to find his new buddy’s melted remains, scattered with a few forlorn lumps of coal. Since the book is wordless, you can make up any ending you want… like “Then, in a puff of pink smoke, the snowman recomposed himself and went to live in the boy’s garage freezer.” Or you could just resign yourself to a peaceful “And that was that.” Raymond Briggs’s The Snowman won the Boston Globe-Horn Book Award, and this wintertime classic continues to win the hearts of kids every year. (Preschool and older) –Karin Snelson

Raymond Redvers Briggs (born 18 January 1934) is an English illustrator, cartoonist, graphic novelist and author who has achieved critical and popular success among adults and children. He is best known in Britain for his story The Snowman, a book without words whose cartoon adaptation is televised and whose musical adaptation is staged every Christmas.

Briggs won the 1966 and 1973 Kate Greenaway Medals from the British Library Association, recognising the year’s best children’s book illustration by a British subject. For the 50th anniversary of the Medal (1955–2005), a panel named Father Christmas (1973) one of the top-ten winning works, which composed the ballot for a public election of the nation’s favourite.

For his contribution as a children’s illustrator Briggs was a runner-up for the Hans Christian Andersen Award in 1984.
Bio from Wikipedia, the free encyclopedia.